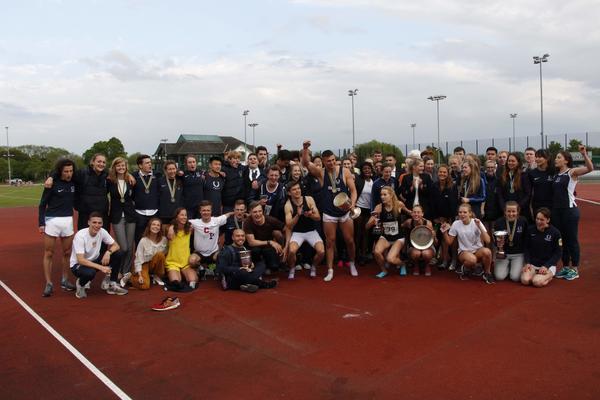 For a large proportion of the OUAC team arriving at Wilberforce Road on the morning of 18th May, a 4-0 Summer Varsity win was viewed as the norm. Back-to-back clean sweeps left only the older members of the squad able to remember the bitter taste of Varsity defeat and, as such, warnings of complacency were rightly being issued. Key departures from Oxford, a strong fresher intake for Cambridge and their home advantage promised a much closer match than the demolition that took place at Iffley Road 12 months earlier. What’s more, the history books were stacked firmly against the Dark Blues as no team in the 145 year history of the Varsity Match had ever won 4-0 in three consecutive years.

The runup to a Varsity Match always poses some entertaining mind games from each side. This year’s controversy came from safety concerns surrounding the state of the pole vault bed which regrettably led to the event being removed from the scoring of this iteration of the match. It was therefore bittersweet when Esther Leong started the day by breaking the match record with a height of 3.51m – a phenomenal mark but one which will join the record books as a “semi-official” record, not having technically been achieved in the Varsity Match.

A rejuvenated Cambridge squad had asked major questions of this Oxford side but failed to upset the Oxford applecart.

The rest of the Oxford team started the day with a bang, taking wins in the Blues and Seconds hammer in both the Men and Women’s matches. Meanwhile, over at the long jump, the Men’s Blues produced another 1-2 to take a firm grip on the match in its early stages. The track action kicked off with the 400m hurdles. Here, the Oxford women continued their good start to win the Blues and the Seconds races, whilst the men lost some ground to the new Cambridge hurdling talent, Sam Clarke, in what was set to become a recurrent theme for the day. The Dark Blue Men had come in as favourites and rose to the label with gusto throughout the early afternoon, sweeping the wins in the 100m and 800m, and continuing to outclass the Tabs on the field in the discus.

Meanwhile, the women’s matches were proving to be tighter affairs – as had been anticipated. There were moments of brilliance from both sides but a particular Oxford highlight came in the form of a front-running masterclass from Issy Scott to take an emphatic win by 8 seconds from her teammate in the Blues 800m. Nonetheless, Cambridge’s Women had their own “big hitters” and a comfortable win for 2018 BUCS Bronze Medalist, Moriyo Aiyeola, in the 100m was mirrored by her Seconds counterpart, leaving both Women’s matches separated by a mere point at the halfway mark. For all Oxford’s dominance in the men’s matches, they weren’t able to have it all their own way thanks to the inspired performances of Cambridge’s talented intake of freshers. Sam Clarke, added the 110m hurdles and the 200m hurdles to his win earlier in the day to seal a rare hat trick, whilst previously-capped GB International, Jeremy Dempsey, demonstrated a mature racing brain in the 1500m to take the win.

It was therefore met with rapturous applause when Oxford’s Cameron Bain was able to reclaim his crown in the Blues 400m and stop any sort of Cambridge comeback in its tracks. In a similar vein, Eleanor Bolton – one of the big breakthrough talents from this season – raised her game once again to see off fierce competition and triumph in the Women’s Blues 5000m. Meanwhile, honours were split in the high jump as countback was unable to separate Teele Palumaa from her Cambridge counterpart. Not to be outdone, Cambridge swept the 200m and 1500m races whilst also taking the spoils in the blues shot put. With only 90 minutes of athletics remaining and the two sides trading blow for blow, it was clear for all to see that the women’s matches were going down to the wire, as they had done for the previous 3 years. Which side would hold their nerve?

The men continued to enjoy their superiority, scooping wins in the javelin, 200m and shot put in both matches to all but seal the victory on paper. It would be improper to write any report without commenting on the herculean efforts of one Dan Gregory. The Canadian multi-eventer put in a workmanlike shift for the Oxford Seconds team, completing 5 events and taking a 21 of a possible 25 points! With the result all but settled, there was a chance for the crowds to take a more neutral interest in the men’s 5000m. This had been billed as the “Event of the Day”, and rightly so, with all 8 men under the Blues standard. It did not disappoint and there was a mutual sporting appreciation for the efforts of GB International Tab, Ollie Fox, who blew away the field to run the fastest time in the event for a number of years.

After this brief ceasefire, rivalries were resumed for the last few events of the day. While the men were able to enjoy a victory lap of sorts in the relays, spreadsheets were being opened and mental arithmetic put to the test as the crowd at Wilberforce Road tried desperately to keep pace with an ever-changing lead in both women’s matches. The Light Blue women finished the day on a high note, taking a surprise 1-2 in the Blues 2000m steeplechase and winning both Blues races in the relays. The win seemed secure in the Seconds Match, but had the Blues done enough? Would this late Cambridge resurgence have swung the tides in their favour?

The presentation swiftly followed and eradicated all doubt: an Oxford win in the Women’s Blues match by the narrowest of margins. The third consecutive 4-0 was complete and this unbelievable squad of athletes had written themselves into the Varsity record books as the most dominant side in the history of the match. A rejuvenated Cambridge squad had asked major questions of this Oxford side but failed to upset the Oxford applecart. Only one question remained unanswered: how long can this Oxford team keep up their winning streak? Only time will tell.