Our women’s track team had a brilliant day securing a 5-1 win.
The 60m team (Zoe, Adahna, Femke, Julia, Polly) won, with PBs for Adahna and Zoe, running 8.09 and 8.10 to put them 6th and 7th in the all-time. There was a win for the 60H squad too (Femke, Alice, Emma, Julia, Adahna) and another PB for Adahna moving her up to 2nd on the all-time. Special mentions to Julia and Emma stepping up to their first every 60H race, with Julia even coming back to hurdles training since (might have converted her – don’t tell Dan).
In the relays, our 4x200 team of Zoe, Issy, Femke and Adahna won what was a very close race, and our 4x800 quartet, Alice, Eliska, Klara and Alex, also claimed victory over a strong Cambridge team. Following a defeat in the 4x400, our DMR team claimed victory, with special mention to Alex Brown who ran an absolutely showstopping mile to beat the tabs on the last leg.
This was a very convincing performance from the women on the track, setting the bar high for May.

With FEAR this year on the same weekend as National Cross Country and British Indoors the Men’s team was missing some crucial members, particularly in the middle-distance events. To make matters worse, president and 400/800m extraordinaire, Max Buckley, was out with Covid and his trusty Magdalen sidekick Isaac also out with injury. The day didn’t start off well, with losses in the 60m and 60m hurdles. A last-minute injury in the warm-up from Joe Murphy and Archie deciding not to jump over one of the hurdles meant our 60m hurdles performance wasn’t as expected. A full team and making sure we don’t treat the hurdles like our friends and instead stay well away from them come Varsity next term and our hurdlers should fare much better.

Both the 4x800 and DMR had some experimental teams with some of our first-choice runners deciding to run 12km at Parliament Hill. Why they thought this was a good idea, no one will ever know! Cambridge resoundingly beat us in both distance events, although not without Tommy Lees providing some quality entertainment. Tommy, running the 1200m leg of the DMR, decided to make life hard for the Cambridge runner Angus Harrington. Making sure to secure the inside lane he refused to let Angus pass, putting in a surge every time he tried and making sure those elbows got some good use on the bends. Going through the first 400m in 57sec was always going to be unsustainable and Angus did get the better of him in the end. But not before making Angus enter a world of pain and providing some quality entertainment for the supporters in the stands.

Isaac, although not running, was a critical part of the day. Providing us all with our FEAR t-shirts, complete with questionable quote, and most importantly leading all the cheering from the stands, nearly losing his voice on many occasions. The 4x400m is an event we are strong in, but without Max and Isaac Cambridge just had the better of us. The 400m squad this year is looking seriously good with some awesome depth. This should serve us well over the next 11 weeks and make sure we win the 4x400m come Varsity.

And so, we finished the day with the 4x200m relay. With the Cambridge president realising the staggers were wrong, there was a 20min delay to the start of the Men’s 4x200m. Sadly this did not go to plan for the men in dark blue either, with Henry pulling his hamstring 80min into the first leg.

So, a 6-0 defeat on the track for the Men is not the best of starts to the season. But all involved are determined to make sure it doesn’t happen in Trinity. With 11 weeks till Varsity the Men’s team have got the time to fix a few things up, get back from injury and make sure we are fit, and firing come Trinity. The day was rounded off with a whole club social and team moral boosted immensely with Max Buckley being able to join us, having tested negative!

Both our men and women high jumpers put up a great fight at VFEAR this year. Sadly, both were narrowly defeated by Cambridge. From our makeshift men’s team, Antony the triple jumper started us off with some promising (if not nerve-racking and a little too vertical) jumps, proving that triple jumpers can indeed become high jumpers (watch out Dan). Jinsen followed closely behind, jumping a solid 1.55. Adam, an ex-high jumper, gave another promising performance after only one session back from his high jump hiatus. Finally, Maranga, our multi-eventer who is sadly too talented in his other events and sports to train with us, cleared an impressive 1.86, before stepping down and competing in 6749 other events. Sadly, Cambridge took the lead when the points were totalled, winning the high jump title with some impressive jumping.

On the women’s side, Angela started us off, jumping a solid 1.25, guesting in her first high jump competition EVER (one to watch with that killer backbend). Meggie, another (almost) newbie to the event, jumped a promising 1.30. Yasmin was next up, clearing 1.45 after approximately two training sessions back from her own high jump hiatus (if only this lot would choose vertical over horizontal jumps). Amelia also jumped a respectable 1.45, and the star of the show, Femke, jumped a fabulous 1.51, before being dragged away to run the 4x200 relay. Sadly, Cambridge once again took the lead, with more impressive jumping.

Although a small team, the girls put in a very solid performance, with a win for Chimdi, Vivian, Caitlin and Phoebe in the discus, and Phoebe, Vivian, Anastasia and Iris-Mae winning hammer in style with a cheeky match record.

The men of the match have to be our jav squad (Rowan, Arya, James and Joe) with 3/4 PBs and a win in a very competitive comp. Big hype to Rowan, our resident rower, with a new PB of 56m. blues blazer what? The rest of the men’s throwers put in some very admirable performances, with special mention to Stewart for competing with multiple knee and ankle supports, and to Joel for looking very competitive against Cambridge’s top guy.

Big well done to all our throwers for so many PBs, it is very exciting ahead of the outdoor season!

Oxford’s vaulters put up a valiant effort against a strong Cambridge team with much more experience under their belts. Nick led the charge with a new PB of 3.50m, coming agonisingly close to winning the event, with the best of the Cambridge vaulters clearing the next height on his final attempt. Cambridge impressed with another athlete also clearing 3 metres, and their next two athletes just below it. Chasing them was Jinsen who gave an impressive performance after a return from injury, with 2.70m showing he’s still got much more to give. Jirka came through next with a solid clearance at 2.50m but with technique improving every time he vaults, 3m is certainly within sight for both these athletes. On only his second ever time on a pole, James comfortably cleared 2m with enough lift to go much higher with a bit more training, we can’t wait to see where he ends up as we approach the outdoor season with great things to come in the summer.

The Oxford horizontal jumps team delivered a masterclass in tab shoeing, with a performance as bright as Jimi’s spikes.

First up was the women’s triple jump. The girls put on a stellar display and beat Cambridge by metres. Special mentions must go to Iris, for jumping a lovely SB, and to Sophie, for stepping up to compete after only 2 training sessions in years! The jumps domination was repeated in the long jump. Adahna completed her pentathlon (60, 60H, 4x200, Javelin and LJ) with an SB of 5.29m. Polly took a break from her LJ sabbatical and jumped 4.75m while Eniola jumped 3.91m. Julia’s jumps showed a linear correlation between distance and competition round. Extrapolating the trend suggests that if only the competition had continued for another couple of rounds, she’d be well over 6m. As it was, her final distance measured just under 5m.

Despite the men’s best efforts to injure themselves during the competition (Adam with a rather nasty spike to the shin, Toby tripping himself up on the 60m start and Jimi managing to kick his arm mid-jump – actually quite impressive to do), the men copied the women’s example and were the resounding winners of both the long and triple jump. Highlights from the triple jump included huge new PBs for Anthony (13.49m) and Maranga (14.02m, a blues standard jump!). Oxford should have been well in the lead from the get-go but Tim decided to add some drama by refusing to get a legal jump in until the penultimate round. Oliver produced a SB to seal the win. In the long jump, Sandy proved once again that all he needs to jump decently is some attention. After dragging up a clap from the crowd he jumped 6.55m to win the competition. Adam, fresh from the 400m race, was closely behind with a nice SB of 6.31m. Maranga seemed to be confused by the change in boards going from triple to long and was determined to take off as far away from the pit as possible. He still managed to put a solid distance down despite half his jump not being measured. Jimi and Anthony both jumped SBs to put the Oxford team firmly ahead. Tab shoeing complete.

This annual event provides athletes with a chance to challenge themselves and compete in another unique match against Cambridge. FEAR is an indoor competition held at Lee Valley Athletics Centre in Hilary term and tests the strength and depth of each university team. The format of the event means that every competitor’s performance really matters. In 2020 just 0.01s separated the two women’s 4x60m teams! 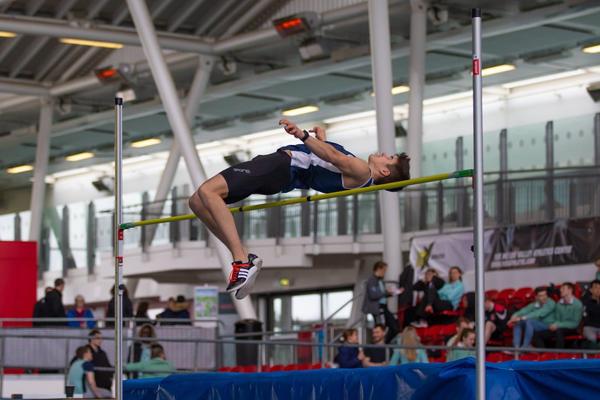 In the field events, four competitors take part for each club in each of the four jumping and four throwing events. The best jumps or throws of the competitors are added together for each team, the winning team being the one scoring the greatest height or length.

On the track all the events are also run as a team. Five athletes compete for each club in the 60m and 60mH with the four best times being added together. The rest of the track events are relays - 4x200m, 4x400m, 4x800m and the DMR (Distance Medley Relay). 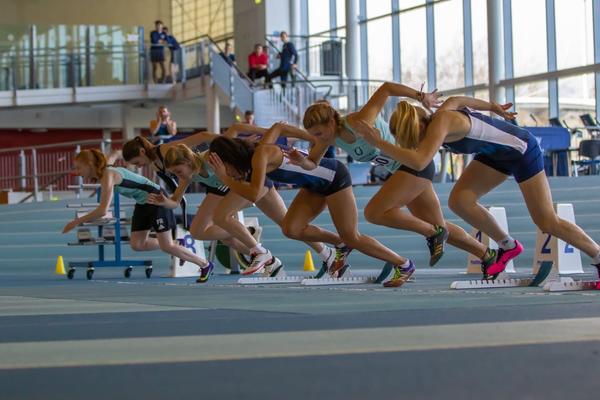 Trophies are awarded to the winning team for each event and to the overall winning women’s and men’s teams on the track and on the field. This competition is a lot of fun but also a chance to put down a benchmark for the summer and show Cambridge our strength going into the outdoor season.